Dear tree, your prickly ouch has again been replaced by the couch. Your dropped needles have been sucked up, sharing space in the Miele with the dog hair, dust bunnies, bits of mirrored glass from a broken bauble, stray Lego pieces not worth bending over for and probably that lost Barbie shoe.

I feel silly for caring and talking to you as a sentient being, but I felt a melancholy chucking your browning carcass onto the improvised and growing pile of previously loved trees in Eel Brook Common. When I walk the kids or dog past I make sure to give a head tilt. You seem like you are doing fine. The rain must feel good. Truly thanks, was so fun having you. A house is never as full as when a Christmas tree is in the Living Room. 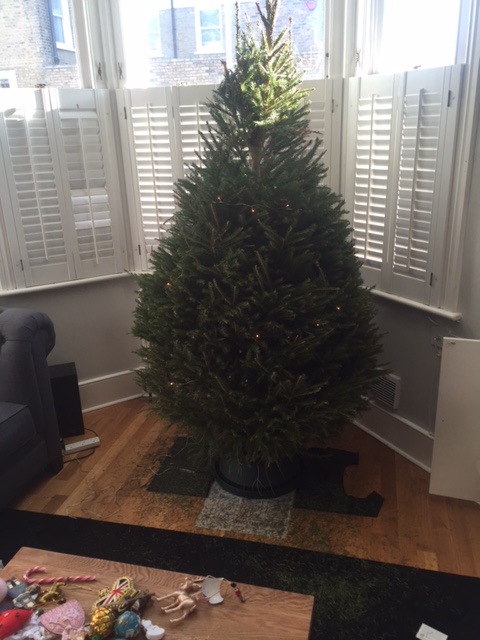 Really is an odd tradition. I imagine its genesis in medieval Germany, a grog fueled dare that went viral. Or perhaps bringing a tree inside with its stored sunshine was a primitive antidepressant to bridge the dark months between fall and spring. Or consuming quite a bit of water, maybe it was a way to deliver humidity to the house, a sacrificial fir to keep the wood furniture and inhabitant’s skin from drying out and splitting? Let’s consult the web.

So Uncle Google says that Vikings, Pagans, Romans, Egyptians all had a their own traditions and believed in one way or another in the mystical power of the evergreen. In various incarnations they’d place its boughs around to encourage the Sun God to get well when it’s seasonal fever was the darkest around the Winter Solstice. A false positive every year proved the tradition a success, as green Spring and nourishing Summer would always return.

Plagiarist Christians in Germany appropriated the custom, often placing apples and other edibles onto their “paradise tree” to symbolise that infamous scene in Eden. Martin Luther is said to be the first to add candles, to mimic the transcendent look of stars through pine trees at night. A native of Germany, expat Prince Albert at Queen Victoria’s urging in 1848 brought the tree out of the Black Forest and into Windsor Castle, where it was featured in the Vogue of the time the Illustrated London News. Upon seeing this East Coast WASPs joined Irish and German immigrants who all worked to spread the tradition to North America like a pine beetle infestation. North of 100 million trees met the axe this past November.

Our family are those sanctimonious purists who can only do the real tree. You know the type? The ones who are always so put out by their commitment to authenticity, bragging by complaint? I get the fake tree, and think I’d be comforted by the familiarity of the same tree getting fluffed out of a cardboard box the following year with all our family’s song, history, dysfunction and psychic energy stored within in its “Made in China” boughs. Not to mention (and not to be a fun sponge), what are the environmental costs of this annual tree killing habit? Wonder what the carbon footprint is of chain sawing, trucking and planting 100 million trees a year? With the wrapping paper, cardboard packaging, Christmas cards, receipts and credit card statements, hasn’t the poor tree suffered enough?

Having known nothing different, I’m pretty sure we will never have a fake tree in our house. For me it’s the difference between deadmau5 and Miles Davis, orange flavoured soda and Champagne, instant coffee and a perfect cappuccino. There is a soul to the real tree that I love and that I mourn. In the end, the lesson of the tree may be one of loss. Because like our tree, we too will be pulled out of the warmth of the dance, the lights unceremoniously yanked from our branches and we will be chucked on the compost pile of the past, having left the world warmer for our memory and providing nutrients for the traditions of the future to continue and grow.

We are in love with the uncommon moments, people, places, events and feelings that make life so interesting. We are always on the lookout for new stories to tell. Please reach out to help us catapult more inspiration and humour into the world.
%d bloggers like this: